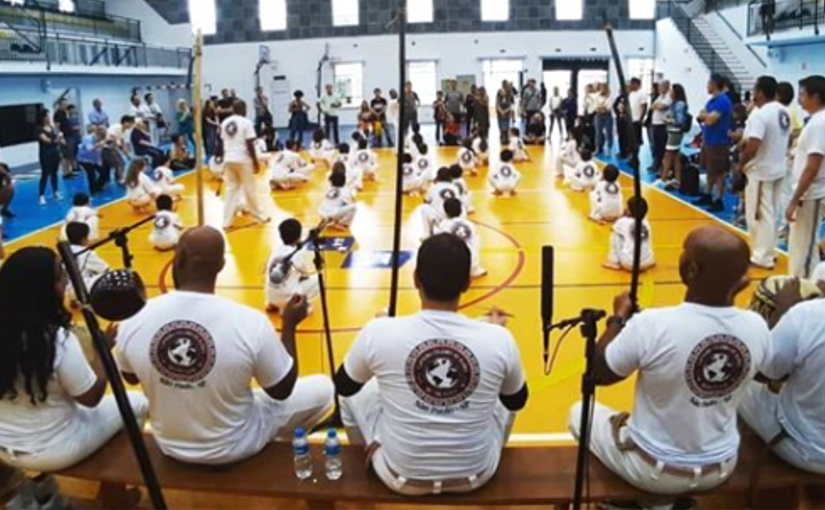 The Celeiro de Bamba Capoeira group was created in the mid-90s in the state of São Paulo, in order to study and practice Capoeira and expressions of Brazilian Popular Culture.

Becoming one of the strongest arms of the Senzala de Capoeira Group in Rio de Janeiro, under the coordination of Grande Mestre Peixinho.

Assuming the responsibility of expanding the Group throughout the Brazilian territory, North America and Europe, carrying out work in all social classes, working in Clubs, Schools, Academies, Neighborhood Associations and Universities.

It carries the DNA of Capoeira da Bahia, Rio de Janeiro and São Paulo in its structure.

Flavio Luiz da Silva, Mestre Flavio Caranguejo, son of capoeirista, was born in the city of São Paulo Brazil. He started his apprenticeship in capoeira when he was still a child, at the beginning of 1980s, at Fonte do Gravatá, with Mestre Kenura, Baiano and Michael.

At the beginning of the decade of 90, he met Mestre Peixinho, when he became part of the Senzala Group of Capoeira, carrying out work in all social classes with activities in clubs, schools, gyms, neighborhood associations and universities. Represented Brazil in several countries (USA, Canada, Argentina, Chile, Israel, Palestine, India, Russia, Finland, France, Serbia, Denmark, among others) giving classes and giving capoeira presentations and shows and Brazilian popular culture.

In 2011 he received the title of red cord teacher granted by Mestre Peixinho from Centro Cultural Senzala de Capoeira. He is also the organizer of the event “Capoeiragem”, which takes place annually in the city of São Paulo, always on the second week of December.

Mestre Flavio currently coordinates the Celeiro de Bamba Capoeira School in the State São Paulo and other states in Brazil, as well as some countries abroad. Is president founder of Associação Casa Grande e Senzala, a non-profit civil organization, created in 2012 with the objective of making capoeira viable as an educational tool and citizenship, in addition to promoting and disseminating Brazilian popular culture through capoeira and its diverse cultural manifestations.

Founded in Rio de Janeiro, Group Senzala has been in existence for more than 30 years. The group is probably the most famous Capoeira group in the world thanks to its many masters and other technicians teaching Capoeira. First introduced to Great Britain in 1971 by Nestor Capoeira but did not flourish until 1989, with the arrival of Fernando C.C. Albuquerque (Master Gato).

Group Senzala’s history begins in 1960 in Rio de Janeiro. Paulo, Rafael and Gilberto Flores, three brothers, originally from Bahia (homeland of Capoeira) had moved to Rio de Janeiro. They began to study Capoeira, during their school vacations, back in Salvador, Bahia. They trained with two of the most famous masters that ever lived, namely Master Bimba and Master Pastinha. Capoeira had become an important part of their lives that they began to train on a regular basis. The brothers held weekly training sessions in their apartment located in the Laranjeiras, Rio de Janeiro.

In 1964, the first of the now famous masters joined the three brothers in practicing Capoeira. That master was Fernando C.C. Albuquerque, who was given the Capoeira name, Gato.

Gato became friends with Paulo Flores on his return from Bahia, but did not know of Paulos knowledge of Capoeira. One night a fight broke out at a party and Paulo became involved. His antagonist tried to front kick him. Paulo dodged the attack and retaliated with a reverse spinning kick, striking his opponent on the temple, knocking him out. After seeing this display, Gato badgered Paulo to train him; Paulo insisted that he was not a master, or even a teacher, “I am only a student so how can I teach you?.” After days of persistent nagging, Paulo agreed to show Gato a few of Capoeira’s basic techniques. Gato began to train with Paulo and his two brothers at the Laranjeiras.