Born and raised in Sao Paulo, Leandro Riberio Braga, most known as Rã. (Rã is a species of toad in Brazil) began to practice Capoeria in 1997 with Mestre Nevoeiro of grupo Equlibrio e Raça. It was there when he learned his first lessons and fundamentals in Capoeira.

In 2000, he decided to expand his training by searching for a bigger more established Capoeira group. His first contact with grupo Senzala took place in the Rio Pequeno neighborhood in the east side of São Paulo. After attending an event organized by Mestre Ulisses (a teacher back then) he meet other legendary Capoeristas such Mestre, Peixinho, Ramos, Toni Vargas, Flavio and others.

In 2004, Rã began his law studies at the Universidade da Cidade de Osasco. For this motive he stopped training until 2008.

By the time he restarted his training with grupo Senzala, Ra’s new teacher Contra-Mestre Nega, moved to the city of Sète in France to represent Capoeira Senzala.

In 2011, Rã was invited by Christopher, “Pit Bull” to move and start teaching capoeira in New York City. They began to teach Capoeira cooperatively until January of 2012, when Pit Bull moved to Singapore. Rã continued his work teaching capoeira and had his first official batizado on July 5, 2015 with the presence of important masters from Brazil.

My Experience Teaching Capoeira in Queens Neighborhood of Jackson Heights

Posted by cidadao on 3:24 am in capoeira, queens, new york | Comments Off on My Experience Teaching Capoeira in Queens Neighborhood of Jackson Heights 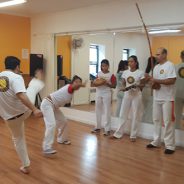 In a predominantly Hispanic neighbourhood, Jackson Heights, Queens has plenty of dance studios and other cultural organizations. As a Capoeira practitioner, I noticed that there was not Capoeira in Queens representing my group or any other Capoeira classes available in the area of Jackson Heights and began contemplating the idea of starting a free Capoeira class for the community. The goal of this idea did not only start my tenure as a Capoeira Instructor but also was the foundation to build a cultural bridge between the Brazilian...

Posted by cidadao on 2:22 am in capoeira, culture, martial arts | Comments Off on Red Bull Paranauê 2018 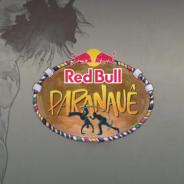 The Reb Bull Paranauê is an international event sponsored taking place in Bahia. In 2018, the event took place on March 3 on the iconic “Farol da Barra” in the city of Salvador da Bahia. The event is open to all Capoeiristas in its judged in different categories. The contestants will be judged on their ability to play all the styles of capoeira, including Regional, Angola and Contemporary. This year, the championship will have a separate category for women. Our professor, Leandro “Ra” who currently teaches capoeira in...

Posted by cidadao on 4:53 am in capoeira, queens, new york | Comments Off on New Capoeira Classes in Queens, New York 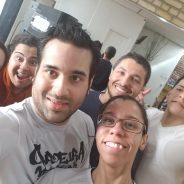 Capoeira Classes in Jackson Heights Queens Our Capoeira group is excited to announce that we will be offering classes in the New York City Borough of Queens. The studio is located in the Historic District of Jackson Heights. Our classes are designed for people with an interest in martial arts and with a particular interest in Brazilian culture. Capoeira is a great work out for the whole body as well as a self-defense system focused in leg strikes and quick movements. Training Capoeira in Queens will help you with agility, flexibility and...

Posted by cidadao on 4:50 am in capoeira, martial arts, tribeca, new york | Comments Off on Ra Capoeira Classes in Tribeca, Manhattan 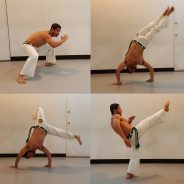 Capoeira Rã Celeiro de Bamba offers classes 2 times a week at the Battery Dance Center located at 380 Broadway in Tribeca 5th Floor. Our instructor Leandro “Ra” has over a decade of Capoeira experience with grupo Senzala and now with grupo Celeiro De Bamba led by Mestre Flavio from Sao Paulo, and it’s a recognized member of the Capoeira community in Brazil and the US. Our classes are designed for all types of students. We believe that Capoeira can be learned by anybody, regardless of age, sex or race. Our class size allows for personalized...

Origins of the Berimbau

Posted by cidadao on 3:41 pm in capoeira, culture | Comments Off on Origins of the Berimbau 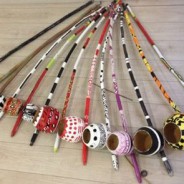 The berimbau is the soul of the roda. Its origins are ancient. In its earliest forms, it was the first string instrument ever invented by men. It was brought to Brazil by Africans where it was developed to the form we know today. During colonial Brazil, the berimbau was played by street vendors, dancers and even during religious ceremonies. It was called by many names, like urucungu, madimba and mbulumbumba. The berimbau eventually became an essential part of Capoeira. Today, every capoerista learns to play and sing at the rythim of the...